Charles Robert Darwin was an English naturalist and geologist, he is well known for his theory of evolution. While right on many counts, his work does have a few glaring blunders that cannot be ignored. In all fairness these errors were because of the limited scientific knowledge during his time.

Long distance travel was fast becoming feasible and safe during Darwin’s time, many scientists were curious and intrigued with the variations they observed between members of the same species in different habitats. Darwin himself undertook voyages and studied geographical distribution of wildlife and fossils he collected during these voyages. This was a cutting edge field of research during his time.

The scientists during the time were actively looking for ways to explain these variations. A simple example would be a dog in the north pole has a lot more fur compared to one in the equatorial regions. It was this observation that led to his historic work – The Origin of Species.

Where was he right ?

For example grizzly bears moving north in search of food need to adapt to the snow. The bears with more fat, who are more aggressive and can camouflage in the snow do better than other bears. Over time these variations in bears help them thrive and multiply and soon you have the polar bear.

This is not adding any new genetic material of the species but simply weeding out what is not working and keeping variations that help the species thrive in its environment. This theory of Natural Selection and Adaptation was satisfactorily explained by Darwin’s work.

Where was he wrong ?

Darwin was wrong when he extended this theory backwards to say that ALL species of life have descended over time from common ancestors, and ultimately from a single cell. This was primarily due to the lack of scientific insights during his time on the constitution of cells and DNA (genetic information).

For example its one thing to say a Polar Bear was a variant of its ancestor the Grizzly Bear but quite another to say that a Polar Bear and a Coconut tree came from the same ancestors. This is simply untrue.

David Hume a contemporary of Darwin thought of cells as simple blobs of protoplasm. Today we know how wrong he is with advances in technology, microbiology and genetics. Darwin did not challenge assumptions the scientists of his time had on the complexity of life and on the information needed to create, even a single cell. The complexity and information contained in a single strand of DNA shows its impossible for it to “evolve”

So how is this important ?

Why this difference is important today is many people simply misunderstand his work and use it to refute Intelligent Design and creationism which was simply not Darwin had in mind in the first place. Its important to see what Darwin did and did not say, then analyze that with the scientific insights we have today. 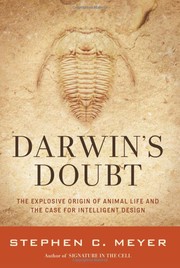